Climate Change A Challenge to the World

The reality of climate change in our times and for the future may be the single most significant threat to our world. The damage it is causing globally, in rapid frequency is all too evident. What are we going to do about it?

Having read about changes in weather patterns and freak weather episodes, the first time I started to think about climate change was after the 2004 Tsunami in Indonesia, which worried and concerned me greatly.

For a number of years I have been trying to seek answers to why the Tsunami occurred and sheer devastation it caused not only in terms of human loss but also damage to the environment. The sheer scale of the disaster was too hard to imagine living in the comforts of home in the UK. Year on year since the Tsunami, we are witnessing major change in weather patterns across the world, we are seeing earthquakes, flooding in places that had never seen this sort of change in nearly a 100 years - and this concerns the conscious mind.

In 2010, I led a group of cyclists from the UK to cycle 350 miles in Bangladesh - from the tea growing region Sylhet to the longest unbroken sea beach destination Cox's Bazaar. It was a dream for me to attempt a ride which would focus its attention on raising awareness of climate change issues and the impact on the lives of around 50 million people and in particular those who live in the southern part of Bangladesh. Having cycled the route in 7 days with our cyclist friends from Dhaka and other parts of the country, we took our message of climate change and its impact on local people to over 30,000 people.

As we gave talks every night to thousands of people, I realised that problem was a serious one and one that was bigger than I had previously imagined. I realised that climate change in Bangladesh is the biggest threat to the people in modern times than anything the country has faced previously. Since that ride I knew I had to learn more about the science of climate change and play my part in raising awareness. That is when I came across the climate reality project.

This year I was delighted to be accepted on the Climate Reality Leadership Corps training in Istanbul. It was great to be amongst 600 people from 94 different countries all excited to learn more about climate change and become climate change leaders from the founder of climate reality project former US Vice President Al Gore. Al Gore is an amazing genius of a man. His knowledge of climate change and the many aspects on the impact of climate change was inspirational. He has spent years learning, researching and campaigning on the topic. I can say that, learning from Al Gore, his team and the international colleagues has provided the best platform to carry on the message of change in our practices to save the planet. 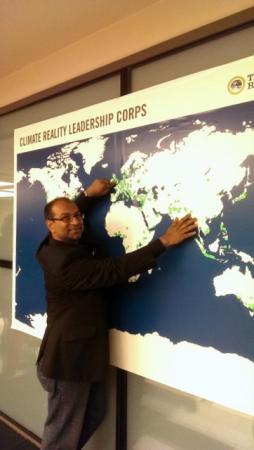 Having undertaken the climate change leaderships Corps training, I have now returned to the UK with the tools to take the message to communities, businesses and public agencies. Let us speak to the new generation and inform them that the decisions we make today, influences what happens in the future.

It is time for us to rise and take the challenge of our times. For a presentation you can request a session via the climate reality website at http://presenters.climaterealityproject.org/presentation_request Read about my cycle-tour from Sylhet to Cox's Bazaar in the blog we made during the tour for the tour.

<< Go back to the previous page